Many times when we stop for a coffee at Hyattsville’s Vigilante Coffee, we make it a point to stop by Studio SoHy‘s exhibit space – which is easy to do as it’s right next door (just enter the door by the coffee fixins/water table & voila)!  Doing so is a such a great, easy, free and accessible way for us all to check out their latest exhibit and some new art! 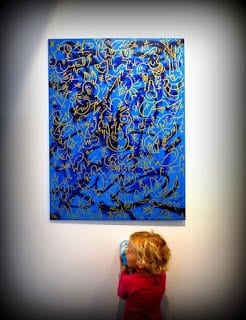 Yesterday, we checked out a solo show by Takashi Nakajima, a DC-based artist whose work is so incredibly intricate that you could spend hours just letting your eyes and mind wander through his work. As his website notes, his work is “influenced by Japanese pop culture, including elements of manga, cartoons, movies and comedy TV shows.” 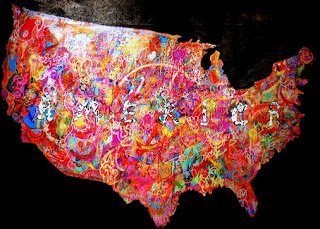 When we lived in DC, the idea of heading to a gallery with the kids was not one that I thought would go well – for me, the artwork, or my kids….Maybe I was wrong. Who knows? All I know is that now, there’s not a week that goes by where me & my offspring don’t get to check out some new artwork along Route 1. Be it on the walls of a restaurant, coffeeshop, gallery, bookstore, the Gateway Open Studios Tour, a traffic box – you name it. Lucky ducks.
Relatedly, just prior to Nakajima’s exhibit, there was an exhibit at Studio SoHy called @OurHyattsville, which included images from the @OurHyattsville account on Instagram. It was so well done and just lovely to see the variety of life in our local community. 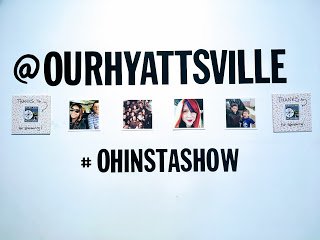 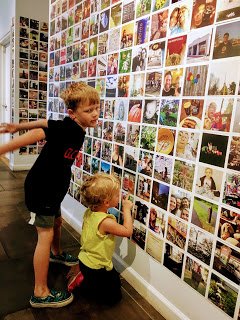 If you missed the show, no worries: Check out @OurHyattsville on Instagram. The brainchild of moderator Krissi Humbard (who deftly curated Studio SoHy’s @OurHyattsville show) is a delight and a welcomed peek into the world and lives of our neighbors. 👏
0 shares
❮❮ Previous Post
Next Post ❯❯

We were away for much of the summer, so we had to … END_OF_DOCUMENT_TOKEN_TO_BE_REPLACED

We are steadily working our way through the 25 … END_OF_DOCUMENT_TOKEN_TO_BE_REPLACED

The next stop on our tour of the 25 Imagination … END_OF_DOCUMENT_TOKEN_TO_BE_REPLACED

Our tour continues with a stop at the two Prince … END_OF_DOCUMENT_TOKEN_TO_BE_REPLACED

Our tour of the 25 Imagination Playgrounds in … END_OF_DOCUMENT_TOKEN_TO_BE_REPLACED 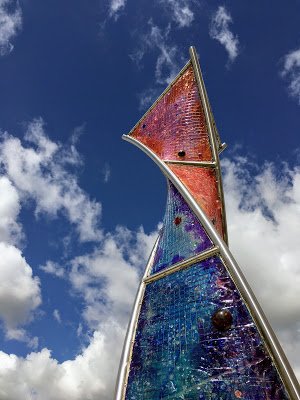