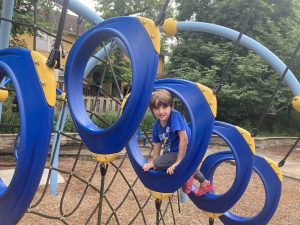 Older kids can practice problem-solving as they cross this rope and ring tunnel at the Green Garden Playground in Mt. Rainier.

Our tour continues with a stop at the two Prince George’s County Imagination Playgrounds located in Mt. Rainier. Both are on the smaller side and are only about a mile apart, so I’m combining them here.

This playground in Mt. Rainier is not huge, but it has some unique play structures that my kids really enjoyed. My older kiddo loved the elaborate rope climbing structure. The central feature is a kind of tunnel made up of separate plastic rings suspended by ropes. It’s pretty challenging to cross it, which meant that he had to go through a process of trial and error to figure it out. I appreciate playgrounds that encourage this kind of brain-building play. 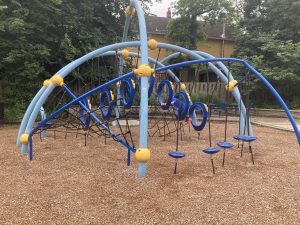 We loved this unique climbing structure and its inviting color scheme.

The smaller play structure was equally a hit with my toddler, who had to use her brain to figure out how to climb the gently sloping tunnels to access the slide. She also enjoyed swinging in a baby swing, and I liked how the otherwise mulched ground has padded sections under the swings and at the bottoms of slides to pad her inevitable falls. 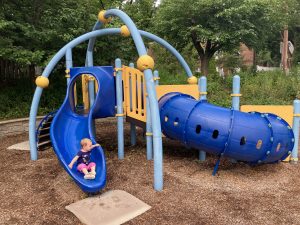 The toddler play area has low-to-the ground slides and tunnels and plenty of padding.

This pretty playground is surrounded by lots of native pollinator plants, so I imagine it’s buzzing with life a little later in the summer. The bright blue and yellow color scheme is unexpected and really inviting. It features a wall that doubles as a bench, so there is some seating for parents, plus two chess areas.

The playground is surrounded by gardens full of native pollinator plants.

I gather that this playground used to include some informative signage, but I didn’t see any. It would have been nice to learn about the pollinator plants as we played. Without it, it doesn’t feel like this playground really has the imaginative theme that I think the designers intended, so I hope these signs are replaced some day.

The gardens and trees provide some shade at different times of the day, though the main play structures are likely in the sun most of the time. In early morning or late afternoon, this playground likely has a good bit of shade.

Parents of little ones should also note that this playground does not have any kind of fence. It sits on a relatively quiet residential street, but I’d still feel nervous visiting this one if my kids were inclined to running into the road.

This cute neighborhood playground features a woodland theme. We immediately checked out the animal tracker, which has buttons kids can push to make animal sounds and to learn about them. I was surprised because the sounds actually work! That’s not often the case on playground equipment. 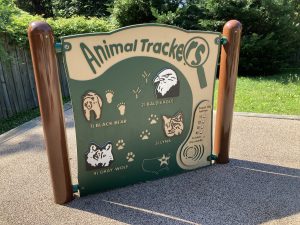 The push buttons on this animal tracker feature actually work!

The playground features a large climbing structure in brown and green. The lower platform has a small slide for little ones and is separated from the really high upper portion by a climbing tunnel. From a safety perspective, I loved this tunnel feature because try as she might, my toddler could not climb it and was stuck on the lower platform. On the other hand, I didn’t love that she was getting frustrated and very quickly bored. Besides this section and the animal sounds feature, there isn’t much for tiny ones to do here. 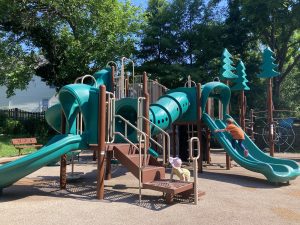 Most of the play spaces on this playground are high off the ground, so it’s not ideal for little ones.

Older kids have several high climbing options, including a tree themed climber, rocks towers, and several big slides. There’s also a spider web and rope bridge climbing area. The forest theme is there in the color scheme and a couple other details, but it left me wishing for a little more to spark our imaginations.

This playground has very little shade, and we were immediately sweaty, even at 9 am. There are some trees nearby, but I don’t imagine it gets very shady at any point in the day. There are a couple of benches, mostly in the sunnier areas, so I sat on the ground in the shade. And there was an odd partially paved, partially grass section with a bench that I couldn’t figure out. Maybe it’s for some kind of sport, but it seemed like wasted space to me. In my sweaty state, I kept envisioning a splash pad there for kids and parents to cool off. A girl can dream… 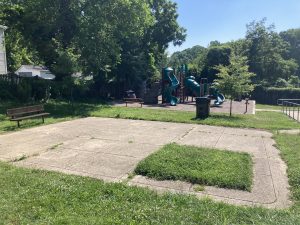 I couldn’t figure out this partially paved, partially grassy area.

The playground doesn’t have bathrooms, so when my kid said he needed to go, we had to go. I was expecting more creativity from an Imagination Playground and probably wouldn’t make a special trip back. But for the surrounding community, this is a nice neighborhood playground.

We were away for much of the summer, so we had to … END_OF_DOCUMENT_TOKEN_TO_BE_REPLACED

We are steadily working our way through the 25 … END_OF_DOCUMENT_TOKEN_TO_BE_REPLACED

The next stop on our tour of the 25 Imagination … END_OF_DOCUMENT_TOKEN_TO_BE_REPLACED

Our tour of the 25 Imagination Playgrounds in … END_OF_DOCUMENT_TOKEN_TO_BE_REPLACED 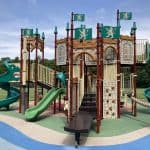 Did you know that Prince George's County is home … END_OF_DOCUMENT_TOKEN_TO_BE_REPLACED 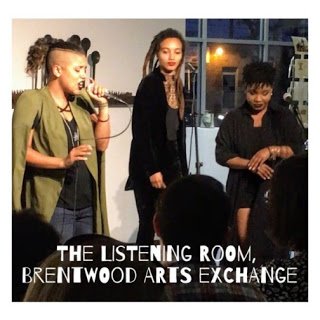