Kenya, Australia, Japan, France, Cuba, Mexico, Los Angeles … and now, Hyattsville. Colette Miller’s Global Angel Wings Project recently landed in our neck of the woods, right along Route 1. The art is open and accessible for all to explore, so stop by and tap into your divine being! 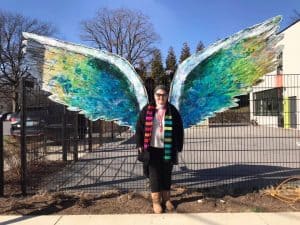 You probably know “the wings,” even if you’re not familiar with the artist or the project. World-renowned artist Colette Miller began her Global Angel Wings Project in 2012 to “remind humanity that we are the angels of this Earth.” (Funnily, her first set of wings was illegally painted on a corrugated iron gate in Los Angeles, with friends of hers looking out for police.)

Barbara Johnson, the executive director and founder of Art Works Now, says she’s known about Miller’s project for years. In November, Miller spent the day at Art Works Now creating two sets of wings to adorn the art space — helped by her father, which Johnson said was really special.

“[I] have been moved by so many of the images on social media and by Colette’s intention behind their creation,” Johnson said in an email.

Rise Above Our Differences

Johnson had originally wanted the wings to be part of the 2019 annual fundraiser for the arts organization. The RISE! theme was, specifically, “to encourage all of us to rise above differences and unite as global citizens,” Johnson said. Alas, the timing didn’t work out. But, really, that sentiment is a good reminder any time of the year.

In an interview from 2016, Colette talked about making her art accessible. The oft-photographed + instagrammed human-sized wings invite people to become a part of the art. The murals are meant to be interactive, placed at eye-level and accessible to the public. 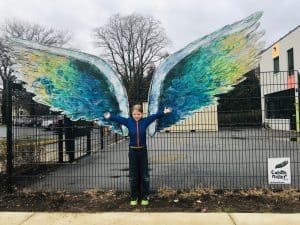 Kids love being photographed in front of these beautiful wings!

It’s a good fit, then, that Art Works Now has its own set of wings. Making art accessible to the community is at the core of the organization: they offer arts programming for all ages and have scholarships for their art programs. 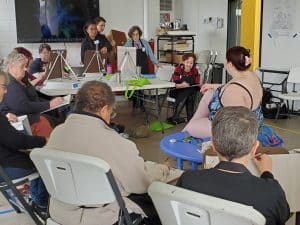 That commitment to accessible art drove the decision of where to put the wings at Art Works. And the install was a group effort. Johnson reached out to her friend and fellow artist Margaret Boozer-Strother (of Red Dirt Studio) for help. The two of them walked the property, looking for the perfect spot. With the help of AWN communications person, Nori Sakha, the three of them came up with the idea to hang the wings — without their panels — on the outside of the fence, to make them more accessible to everyone in the community. But, how? 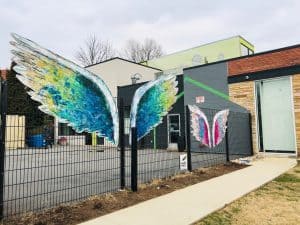 Johnson reached out to Henry Cross of Cross Museum Services (who happens to be married to AWN teaching artist Rachel Cross) and he knew just what to do. Rachel cut out the wings from the panels and Henry created the hanging design and structure. On Jan. 17, Rachel and Henry delivered and installed the wings. 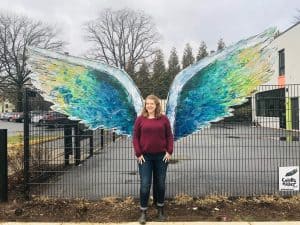 “This is very special work about changing the landscape from advertising to aspirational images. And it’s also about enlightenment,” Johnson said. “It’s also so important that they’re for everyone. Everyone can stand in front of them — from famous Australian drummers to Kenyan street kids and mayoral candidates. 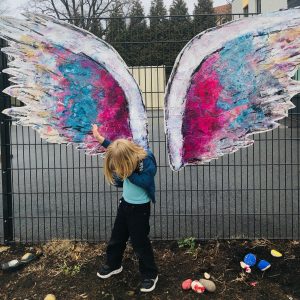 T dabbing his way to the divine!

What are you waiting for? Stop by and tap into your divine being!

Art Works Now is located at 4800 Rhode Island Avenue in Hyattsville. Johnson urges visitors to tag @artworksnow and @colettemiller in their photos.

*Unless otherwise noted, all pictures by Krissi Humbard.

We were away for much of the summer, so we had to … END_OF_DOCUMENT_TOKEN_TO_BE_REPLACED

We are steadily working our way through the 25 … END_OF_DOCUMENT_TOKEN_TO_BE_REPLACED

The next stop on our tour of the 25 Imagination … END_OF_DOCUMENT_TOKEN_TO_BE_REPLACED

Our tour continues with a stop at the two Prince … END_OF_DOCUMENT_TOKEN_TO_BE_REPLACED

Our tour of the 25 Imagination Playgrounds in … END_OF_DOCUMENT_TOKEN_TO_BE_REPLACED 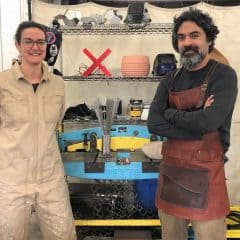