We’ve a new brewery in town and this one’s serving up something sweet! Hyattsville’s Maryland Meadworks opened its doors recently for a couple of soft openings, giving eager beavers like this lady here a chance to try some delish mead ahead of their forthcoming grand opening this October.

Owner and head brewer Ken Carter decided to open this first meadery in Prince George’s County after home brewing for a number of years. When an opportunity arose to make use of a great space next to Hyattsville’s Shortcake Bakery, Ken & Rumi Matsuyama (wife, fitness guru, local superstar and more) got to work clearing out the old space, purchasing furniture, acquiring permits, etc. Last October, Maryland Meadworks set up a Kickstarter to help with purchasing some necessary equipment. Thankfully, the Kickstarter raised over $12,000 and helped get Maryland Meadworks get on track for opening this fall. 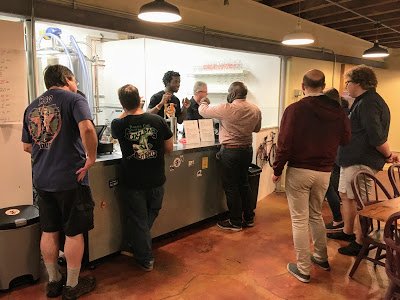 I know very little about Mead, which is why it was really helpful to have Jay behind the bar for last night’s soft opening, explaining in great, patient detail the story behind each of five meads on the menu. (Who knew Meads came in so many varieties?!?! Perhaps all of you knew that, but this simpleton didn’t so I was tickled to see that they even have a mead for IPA drinkers like mycalled “Bitter Bee.”) 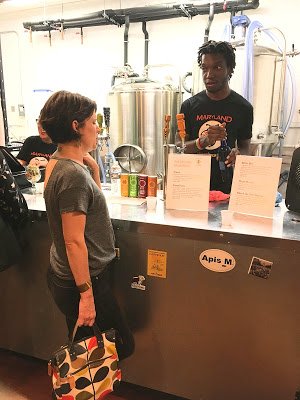 Truth be told though I fell in love with “Blue is the New Orange,” with its smooth, oak-y taste and dry finish. And it’s 14% ABV. Mamma like. 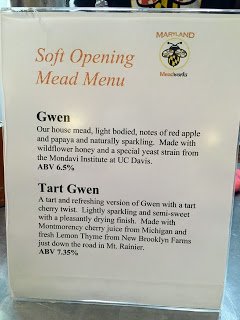 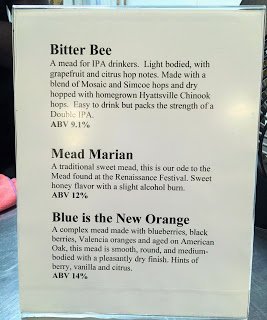 As shared on their Kickstarter page, “Maryland Meadworks’ mission is to produce handmade, high-quality, great-tasting mead—also known as honey wine—using natural brewing processes and the best local and regional ingredients available, including some honey from Hyattsville’s own Hope Honey Farms.”

Maryland Meadworks is hosting a couple more soft openings ahead of their grand opening in October.  Check out their Facebook page to learn the dates and be in the know!

*Cool little fact about Mead: Mead is gluten free (unless it’s a type made with malt, which is more an exception than a rule, I’m told).

Maryland Meadworks (Facebook) is located at 4700 Rhode Island Ave in Hyattsville (same row as Shortcake Bakery).  And while you’re in the area, why not also check out these great local breweries, too: Streetcar 82 Brewing Company, Franklins Restaurant, Brewery and General Store, Town Center Market (not a brewery, itself, but still a great spot to enjoy some craft beer), Pizzeria Paradiso (also not a brewery but amazing pizza and a meticulously fine craft beer menu) and, soon enough, Denizens Brewing Co. (coming to Riverdale Park Station).

We were away for much of the summer, so we had to … END_OF_DOCUMENT_TOKEN_TO_BE_REPLACED

We are steadily working our way through the 25 … END_OF_DOCUMENT_TOKEN_TO_BE_REPLACED

The next stop on our tour of the 25 Imagination … END_OF_DOCUMENT_TOKEN_TO_BE_REPLACED

Our tour continues with a stop at the two Prince … END_OF_DOCUMENT_TOKEN_TO_BE_REPLACED

Our tour of the 25 Imagination Playgrounds in … END_OF_DOCUMENT_TOKEN_TO_BE_REPLACED 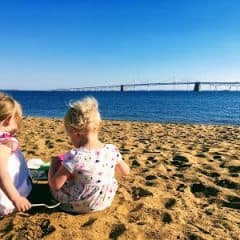 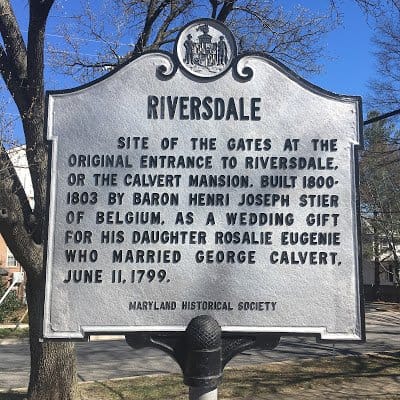