🔊 “Doesn’t it bother you at all that you’re married?”…”What I want to know is, does it bother you?” 🔊 “With my brains and your looks, we could go places.” 🔊 “Keep on riding me and they’re going to be picking iron out of your liver.” 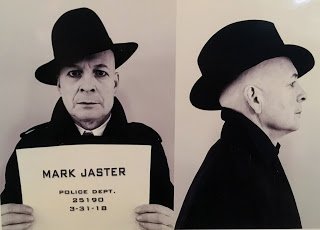 No, this is not an “Overheard while standing in line at Safeway” post, but is instead an equally entertaining and intrinsically more scintillating Route One Review of Happenstance Theater‘s Cabaret Noir, performing now through April 15th at Mt. Rainier’s Joe’s Movement Emporium! 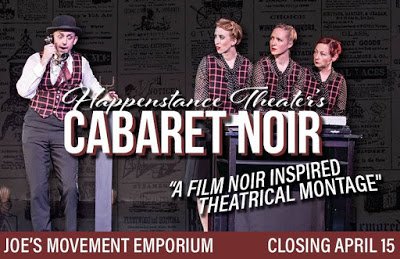 The intro quotes? They’re taken from some of the most unforgettable film noir films, like Gilda (starring Rita Hayworth), The Postman Always Rings Twice (starring John Garfield) and The Maltese Falcon (starring Humphrey Bogart and Wilmer Cook)! See?!? You know more film noir than you thought!

In Cabaret Noir, a “series of dark, comic vignettes reveals Femmes Fatales and fedoras, trench coats and torch songs, intrigue, suspense and shadows.” I loved the no-nonsense, rapid fire dialogue, the costumes, the dramatics and the slow motion scenes.  Man, did I love those slow motion scenes! The amount of talent and skill it must take to make these scenes look as effortless and flawless as they were left me absolutely gobsmacked. Which is not an easy feat. 😉 Bravo, Happenstance!

But don’t just take my word for it. The Happenstance ensemble has been praised by press all around, like when The Washington City Paper noted “Happenstance Theatre’s ensemble comedy is gut-busting kind of funny.” Or that time when the Washington Post described their work as “visually striking and whimsical without being precious.” Or that time when they were voted the Best Comedy of the Capital Fringe [Festival]!

Happenstance Theater performs at Bethesda’s Round House Theatre, the Baltimore Theatre Project, Capital Fringe Festival and now they’re bringing their goods to Joe’s Movement Emporium! Read: You don’t need to travel into DC or over to Bethesda for a good night at the theatre; Happenstance Theater is playing right in our own backyard, Route One!

**Discount Alert! Check out these specials for Route One Fun readers!

Disclosure: I received complimentary tickets to view and review this show.

We were away for much of the summer, so we had to … END_OF_DOCUMENT_TOKEN_TO_BE_REPLACED

We are steadily working our way through the 25 … END_OF_DOCUMENT_TOKEN_TO_BE_REPLACED

The next stop on our tour of the 25 Imagination … END_OF_DOCUMENT_TOKEN_TO_BE_REPLACED

Our tour continues with a stop at the two Prince … END_OF_DOCUMENT_TOKEN_TO_BE_REPLACED

Our tour of the 25 Imagination Playgrounds in … END_OF_DOCUMENT_TOKEN_TO_BE_REPLACED 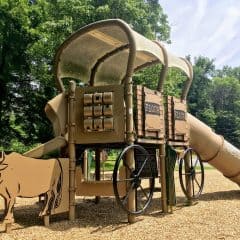 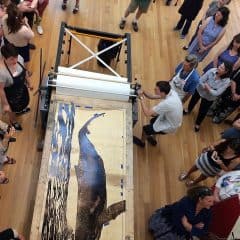